Club great, Ben Gray was honoured during last Saturday’s Williamstown CYMS Presentation Night with an award named after him.

Senior coach, Mathew Montebello made the announcement to the crowd of CYs faithful and players with their families and friends.

The Ben Gray Award will be given to the best first-year player from 2020 onwards. The recipient of the award will have best represented the CYs values, just like Gray did.

Gray has stepped down from senior football after a decorated 211 game career which included; four Grand Finals (one as captain), two Best and Fairests, VFL and Big V representations.

Every year for now on, Gray’s famous number 33 will be worn by a first-year player that the leadership and coaching group feels represents the CYs values the most.

“For someone who has created so much history for the football club and contributed so much, his legacy should go on,” said Montebello.

When the speeches were finished, the club celebrated in style after to a season which produced four premiership flags, including a promotion to Premier B. 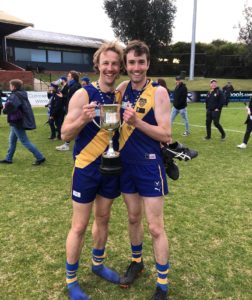