2018 ended in heartache for the Seniors.

A year later they were sitting on top of the world after an undefeated, premiership winning season. 2019 was arguably the most successful season for the entire football club – four flags, the Seagals playing in their first ever Grand Final and the Under 19’s Colts proving doubters wrong in their premier division.

Mathew ‘Monty’ Montebello has helped shape the Williamstown CYMS Football Club since his emergence in 2011. The 2019 VAFA Coach of the Year coached his Senior side to premierships in 2014 and 2019 and he is also the club’s Director of Coaching.

After playing basketball as a junior, Monty then transitioned into football. He trained with the Western Bulldogs during their 1999 preseason and then eventually played with Williamstown VFL.

Monty then had a successful eight-year career at Spotswood Football Club with a Best and Fairest and  two Grand Final wins as captain.

He called time on his playing career at the end 2009 before spending a year off from the game. Monty then joined the CYs to take on his coach aspirations with the CYs U19s.

After a phone call with Willy Juniors Vice President at the time, Rod Ford, Monty felt it was right to join the club.

Monty is also the Assistant Principal at Williamstown Primary School, it’s fair to say he is proud to have coached a number of his ex-students.

“I saw it as an opportunity to reconnect with people I taught at school.”

Monty took over the U19s side whilst overseeing the U18s program and a place in the Grand Final was achieved for his U19 group.

The U19s group is now run by Con Terzoglou, who Monty praised behind closed doors in front of players and staff after the Seniors Grand Final win against Ajax.

Monty and Terzoglou’s relationship is strong which is a key reason for the successful transition from Unders to Seniors for a lot of players.

“The following year (2013) I was supposed to take up a coaching role with Williamstown VFL, and then the club (CYs) offered me the Director of Coaching role. I took a few days to think about it and then thought, yep.. lets do it.”

It is fair to say Monty’s presence at the club is felt and his players and staff look to him for direction and inspiration. But the evolution of Monty’s coaching career slightly draws parallels to that of Collingwood coach Nathan Buckley.

Early days when the former Collingwood champion took over the helm, he was overtly coaching like he used to play— Intense. And Monty felt that his own mentality was intense and of the idea “this is my way.”

Within the public eye, Buckley now has become more a people person around his football club by delegating and letting his coaches and players run more of the show by applying their own input more often. Monty has done the same at the CYs.

“Now with training I will run only one drill, whereas in the past I would try to run the entire session.”

Monty describes himself as a ‘collaborative coach’ but attributes the strong leadership across the board for allowing him to coach the way he wants.

Monty refers to the discussions with his coaching team as a ‘round table.’

He learns and listens from some of the other great football minds of the club, which includes the likes of; Backline specialist Michael Johnstone (who has been Monty’s right-hand man for eight years), South Melbourne Hall of Famer David Akerley and Premiership winning Reserves coach Cameron Oates —just to name a few.

Monty acknowledges the heartbreak of his side narrowly missing out on playing in the 2018 Grand Final to the success of 2019.

“Let’s not let this happen to us again.”

“It wasn’t fear that drove it, it was more that desire to achieve that drove us.”

“The club’s probably never dreamed of playing in Premier A, but that’s where we sit now, we sit in the space now where that’s where we can dream, so now therefore it’s only the expectation to succeed that we can take up with us.”

The Seniors and Reserves this season (whenever it may begin) will venture up to Premier B for the first time in the club’s history. 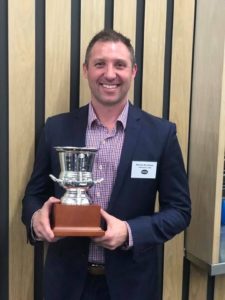