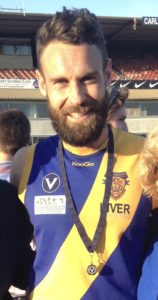 Williamstown CYMS Football Club is excited to announce the reappointment of our Reserves coach Cameron Oates. In what will be Cameron’s 2nd year as Reserves coach and his third year involved in the CYs coaching program, Cameron’s communication skills and positive approach to player development has seen him have instant impact on our football program.

Cam came to the CYs back in 2013 where he quickly established himself as a hard working utility. In 2014 he moved into the midfield where he became an integral part of our 2014 senior premiership. Cam’s on field leadership has transferred to coaching successfully in the coaching ranks. In his first year as Reserves coach Cam lead a young new team to the finals. This experience will see the group be better placed for further development in 2019.

Cameron is enthusiastic about what 2019 holds, while looking to continue to develop our reserves program and take the group deeper into the finals. The club is in a great place when we have the opportunity for our young players to be lead by former players, and a successful and admired one at that.