Sitting at the Spotswood Pub with a pint of Carlton Draught in our hands, we spoke about footy, life and music. The conversation seemed so casual, yet I kept on forgetting that I was sitting across from a club legend. A man who has played the most games ever for the CYMS Football Club.

Ben Hynes is not one-hundred percent sure how many games he has played for the club, however, it is an estimated 314 on-field appearances for the CYs. And Ben is not the only Hynes to pull on the gold and blue jumper; his father, Damien played for the club as well brothers Tim and Jules.

Referred to by his teammates as “Hynsey”, the three-time premiership player is also a member of the 1984-2006 Williamstown CYMS Team of the Century. He also has a musical side to him. The former member of The Cliffords and The Supporters is still performing at pubs and functions, belting out tunes with other musicians.

When asked about the anxiety around injured fingers from footy affecting his ability to pull the strings of his guitar, Hynes faced his hand up to me with a small smirk. “I’ve had a couple of surgeries on this thing.” His ring finger was still pointing the wrong way.

Hynes is also popular with the kids. During our interview, I had the pleasure to meet his wife, Lisa and three young kids: seven-year-old Charlie, daughters Lucy and Eleanor, plus Hynes’s niece, Phoebe. They were pulling on his arm with wide smiles on their faces willing their Dad and uncle to join them for dinner.

I asked Hynes about the parallels between all three premierships he played in (2008, 2016, 2017). Hynes attributed all three results to a winning culture.

So what is a winning culture? “Knowing you’re going win”.

Hynes further explained the constant confidence that every line had a reliable ball-winning ability.

Astoundingly, Hynes has won a premiership with all sides of the CYs: Seniors, Reserves and Thirds.

The 2016 Premiership win over Mazenod, as well as the 2017 victory over Caulfield was under Coach, Matt Wynd. I asked Hynes about his relationship with the gun coach “He’s still a larrikin, but yes we are good mates because of that stuff (premierships).”

Hynes controversially missed out on playing in the 2009 Grand Final, due to what he labelled an innocuous spoil in the preliminary final which suspended him for the following week, the Grand Final.

Despite being happy for his teammates winning a premiership, Hynes admits there was some sadness about not getting that medallion around his neck on the day. “There was a lot of bottom of your guts torture.”

There was relief (when he won the 2016 premiership) rather than euphoria, “there was a lot of redemption there.”

“We went on to win the premiership that year (2009), I’d prefer to be rubbed out and win, compared to play and lose in a Grand Final.”

Hynes currently plays with the Fourths side, still under Matt Wynd and is on DJ duties before games. Killing in the Name by Rise Against the Machine is a frequent tune played in the rooms before the games.

And what does next year hold for the 40-year-old CYMS icon?

“I will see how I feel in preseason; I always make a decision in preseason. I feel really good at the moment.”

Hynes and the Fourths remain undefeated after nine rounds. 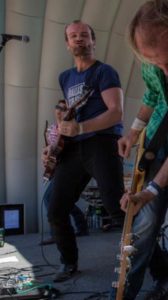