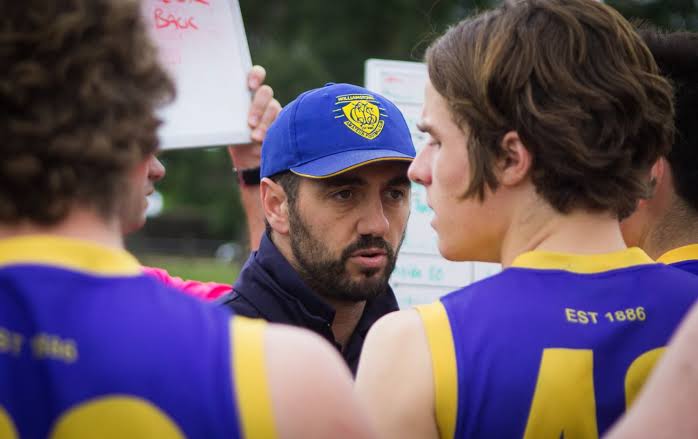 The Williamstown CYMS Football Club is thrilled to announce the appointment of Con Terzoglou as Senior Coach for the 2022 season.

Con needs little introduction to most supporters of the CY’s, having coached the Under 19s since 2014. Having served an eight-season “apprenticeship” under departing senior coach Mathew Montebello, Con is ready for the next challenge so the time is right for him to move into senior coaching. Watching many of the young players whom he had mentored in the under-age ranks progress into the senior ranks only deepened his desire to develop players at the senior level. He acknowledges that “Montey’s” will be big boots to fill.

Con played his junior football at Werribee and indeed was one of the members of the pioneering Werribee Under 19 team which joined the VAFA in 1999. After then playing a season of senior footy with Werribee Amateurs, Con took some time off to follow his beloved Richmond in the AFL more closely. He is a passionate Tigers supporter, as his nickname “KB” would suggest. But when a group of mates formed a team to play in the VAFA’s Clubbies at Hawthorn Amateurs, Con put his hand up to be playing coach. It was the beginning of a coaching journey which would see Con coach this team to a flag, and many subsequent finals appearances by his Under 19 teams at Williamstown CYMS. His Under 19 teams never captured the ultimate prize, but the 2014, 2016 and 2018 teams are those which, but for a little more luck, could have won premierships.

Like all of us, Con has been frustrated by the constraints which Covid has imposed on the community. With restrictions lifting, he is excited about the prospect of gathering the playing group together and getting stuck into pre-season activities. His wife Connie and their two young boys have been a constant presence during Con’s tenure in charge of the Under 19’s and they are fully supportive of his graduation into senior coaching ranks. Con is not shy about his intentions to be in this for the long haul.

All of us at Williamstown CYMS congratulate Con Terzoglou on his appointment as Senior Coach, and wish him nothing but the best in what we hope is a long and productive coaching tenure.